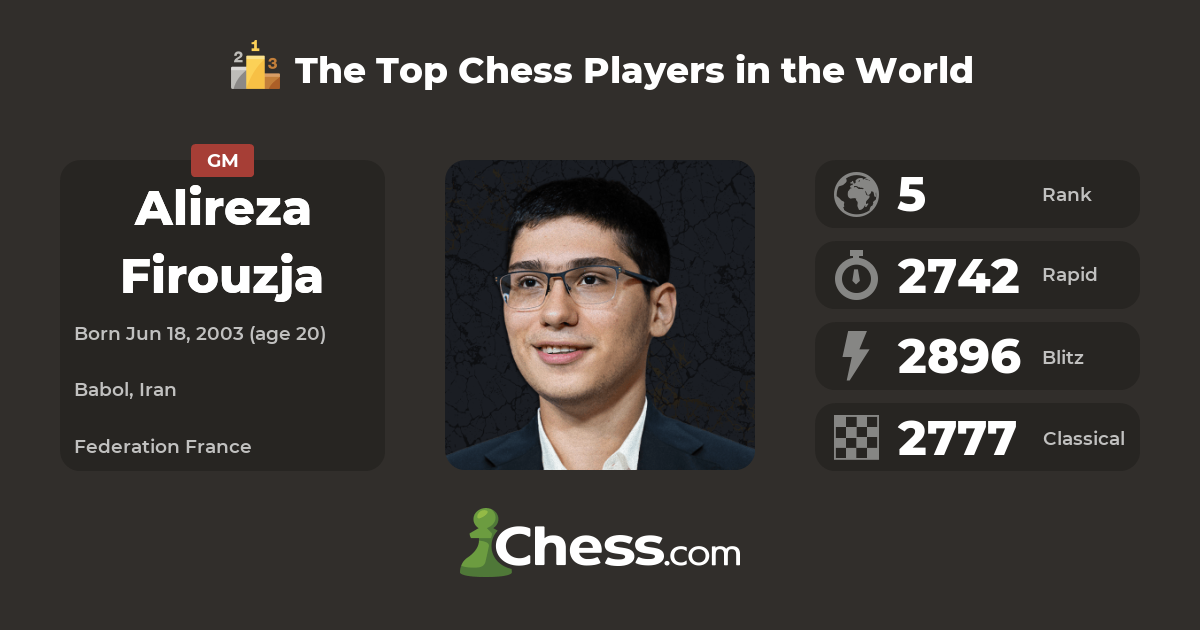 Alireza Firouzja is a grandmaster of Iranian origin living in France. He is a double Iranian champion and reigning Fischer Random European champion.

In late 2019 and early 2020, Firouzja electrified the chess world with his second-place finish at the World Rapid Championship (one point behind world champion Magnus Carlsen) and his incredible 5/7 start at the Tata Steel 2020 tournament.

Firouzja’s trajectory continued to accelerate in 2021, when he won the Riga Grand Swiss, scored 8/9 and the European Team Championships, and soared to No. 2 in the world rankings with a rating of 2804. His victory in Greater Switzerland qualified Firouzja for the 2022 Candidates Tournament at the age of 18, one of the youngest to achieve this feat, and Firouzja also broke the record for the youngest player to exceed a score of 2800.

Firouzja learned to play chess at the age of eight, and within a few years it was clear he was a prodigy. In 2015, he won the gold medal for the under-12 section of the Asian Youth Chess Championship. In 2016, Firouzja became the youngest Iranian chess champion (at the age of 12) and also won the title of international master.

In February 2018, Firouzja earned his final GM norm at the Aeroflot Open and became a grandmaster at the age of 15. In the 43rd Chess Olympiad he played board four for Iran and scored 8/11. Firouzja won the World Under-16 Chess Olympiad gold medal and scored 8/9 with a performance rating of 2736.

In the next game of Chess Olympiad 2018, Firouzja leads a devastating attack. After finding a wonderful tactical resource with 21.Rxh7+!, the black king has nowhere to hide. Firouzja can even make extremely difficult attacks easy!

At the end of 2018, Firouzja entered the Rapid World Championship as the 169th ranked player out of 206 entrants. He amazed the chess world with his sixth place finish behind GMs Daniil Dubov, Shakhriyar Mamedyarov, Hikaru Nakamura, Vladislav Artemiev and Carlsen. He scored 10/15 with a performance rating of 2848.
The next day, Firouzja had a blistering start of 6.5/7 in the world blitz championship (one point ahead of the peloton)! In round eight, he lost to Carlsen and his performance came down to earth. At these two events, the 15-year-old GM began to make his mark on the world stage.

In the next match of the 2018 World Blitz Championship, Firouzja once again displayed her attacking skills. After a relatively calm Catalan opening, he abandons the pair of bishops to double the black f-pawns. He leads the attack so clearly and decisively that his opponent has to give up at move 27! Another amazing game from Firouzja:

2019 was an important and active year for Firouzja. He started by winning his second Iran championship with a score of 9/11. He continued his impressive results with a score of 7/9 at the World Tag Team Championship and tied for first at the Sharjah Masters tournament. In April 2019, playing in the Bullet Chess Championship 2019 on Chess.com, Firouzja lost a close match against Nakamura (the winner of the event).

In another example of a fantastic attack, Firouzja uses a somewhat odd (but memorable) exchange sacrifice early in the midgame. He then sacrifices his knight on d5, and the kingside attack begins with 16. Nf5. Firouzja’s play over the next six moves is quick and vicious, forcing the resignation on move 22!

The youngest 2700-rated player in the world

Firouzja performed well in the 2019 FIDE World Cup, beating GM Arman Pasikian in the first round and Dubov in the second round. In the third round, he drew both standard matches with the number one seed GM Ding Liren (the eventual World Cup finalist) but lost in the quick tiebreaker.

Here’s a remarkable offensive win from Firouzja at the 2019 FIDE World Cup. After a quiet opening and some midgame maneuvering, Firouzja lands a knight on f5 on move 23, and the fun begins. Using the pair of bishops and an exchange sacrifice, he tore Black’s kingside at move 32, and it was all over.

Change of nationality and rapid and blitz world championships 2019

In December 2019, Firouzja informed the Iranian Chess Federation that he wanted to change his nationality. This decision came in response to the federation banning its players from participating in the world speed and blitz championships (done to maintain Iran’s stance of avoiding playing matches against Israeli competition). Firouzja played in the rapid and blitz world championships but under the FIDE flag.

He is currently not a member of any chess federation, although the president of the Iranian Chess Federation has suggested that Firouzja could play under the American or French flag in the future.

Firouzja put in a fantastic performance at the Rapid World Championship, scoring 10.5/15 and finishing second behind Carlsen, the best result of his young career. He didn’t disappoint at the World Blitz Championship either, scoring 13.5/21 and finishing sixth in the prestigious event.

In the 19th round of the blitz championship, Firouzja faced Carlsen, and an unusual situation occurred: Firouzja ran out of time despite having three pawns. In final position, Carlsen was down to one bishop. In an online game this would have resulted in a draw, but according to FIDE rules, as long as the possibility of checkmate is present, the game is not a draw but a loss for the player. who has no more time.

In this controversial flash match, Firouzja clearly won on several points. Despite the result, Firouzja dominated the world champion in this match.

Firouzja ended 2019 with a bang and left the chess world begging for more. At the beginning of 2020, Firouzja took part in the Tata Steel Chess tournament as one of 14 world-class participants (including Carlsen, Fabiano Caruana, Wesley So, Viswanathan Anand, Anish Giri, Jorden Van Foreest, Jan-Krzysztof Duda, Artemiev, Jeffery Xiong, Vladislav Kovalev, Yu Yangi, Nikita Vitiugov and Dubov). Firouzja led out of the gate with 2.5/3 before losing the fourth round to So. Firouzja came back with victories over Giri in the fifth round and Xiong in the seventh round.

With Firouzja’s victory over Giri in the fifth round, the game finally reaches a rook and pawn endgame after a very interesting opening. At move 40, Giri decides to exchange one of his doubled h pawns for the passed e pawn (exchange of turns to be made). In the resulting king and pawn endgame, Giri miscalculates and plays 44…Kf6? instead of 44…Rd6, and Firouzja brings back the full point!

Firouzja set the tone with five runs after seven innings. After a draw with Van Foreest in the eighth round, the eyes of the chess world were on the ninth round encounter between Firouzja and Carlsen. This match didn’t go as well for Firouzja as it did in their previous encounter, and the result was the same: Carlsen won.

The loss to Carlsen was the first of three straight defeats as Firouzja lost to eventual winner Caruana as well as former world champion Anand. He drew his last two matches with Vitiugov and Dubov and posted a more than respectable score of 6.5/13, tied for sixth place.

In February 2020, Firouzja participated in the Prague Chess Festival Masters tournament as a last minute replacement for Wei Yi, who was unable to travel due to the coronavirus. Firouzja played a number of exciting matches, finished in the squad with 5/9, and GM Vidit Gujrathi beat in a knockout blitz to clinch the top prize. It was his first victory in a major tournament, and perhaps the first of many to come.

In April 2020, Firouzja defeated Carlsen 8.5-7.5 in the final of the Banter Blitz Cup, a 128-man online knockout tournament with a top prize of $14,000. A month later, he won the Chessbrah Invitational, a whirlwind tournament between six super grandmasters on Chess.com. The Iranian grandmaster defeated Giri in a best-of-10 final.

In October 2020, Firouzja finished in second place behind Carlsen in the Norway Chess Super Tournament. He only lost one match in the entire tournament, against Carlsen. Three months later, he tied for third place in January 2021 at the prestigious Tata Steel Chess Tournament in Wijk aan Zee.

At the start of 2021, Firouzja continued to show immense talent. In March 2021, the Iranian supergrandmaster won the 2021 Bullet Chess Championship by defeating tournament favorite Artemiev Nakamura and GM Andrew Tang in the final, just after winning two consecutive title Tuesdays.

His progress only continued in October and November with a victory at the Riga Grand Swiss. Firouzja’s outright victory with an 8/11 scoreline earned him a spot in the 2022 Candidates. Only Carlsen and GM Bobby Fisher played in a Candidates Tournament at a younger age – good company to keep. A victory in the group of eight candidates would make Firouzja the youngest to have played a match for the world championship. His 8/9 score at the European Tag Team Championships just after the Swiss Grand raised his FIDE rating to 2804, making him the youngest player to break the 2800 barrier.

It’s clear that Firouzja’s fledgling career is just beginning, and perhaps the most exciting aspect of his accomplishments is the well-rounded nature of his success so far. He is the reigning Fischer Random European Champion and has shown great skill in all competition time controls. Only time will tell what a dazzling future awaits the young super grandmaster.