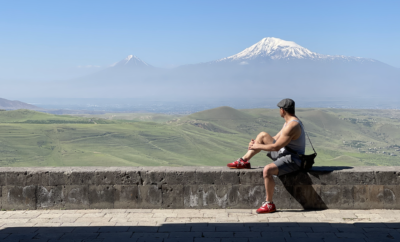 Congresswoman Judy Chu with Vic Gerami at her ‘Motherland’ premiere.

Vic Gerami has watched in horror as deaths rise in Artsakh, a part of the world he calls the “Mother land,” also the title of his first feature-length documentary.

Over 44 days from September 2020, around 5,000 deaths, mostly Armenians, occurred in the Artsakh region (also known as Nagorno-Karabakh), according to BBC News.

Gerami is an Armenian-born journalist and activist who hosts the Los Angeles radio show “The Blunt Post with Vic” on KPFK 90.7 FM, and operates his own media company in and around West Hollywood. With “Motherland” premiering this month, it added “filmmaker” to its credits.

In the film, Gerami explains that mercenary fighters from neighboring countries, including Syria, Pakistan and Turkey, helped Azerbaijan carry out “genocide” against the Armenians of Artsakh.

The details of such an attack on innocent citizens should sound familiar to you, echoing reports from Ukraine, where the country’s population is at the mercy of those bent on taking control of their territory.

In “Motherland”, Gerami also exposes the dividing line that exists for countries like the United States, which want to support the people, but are also keen on selling weapons and/or hungry for natural resources such as oil.

An example of this dichotomy came this month, when President Biden traveled to the Middle East to get more oil to lower gas prices for desperate Americans. He has, however, come under fire for dealing with the man said to be most responsible for the murder of Washington Post journalist Jamal Ahmad Khashoggi.

“Russia is the big winner,” Gerami says, explaining that geography allows Russia to access an area where it hasn’t had a presence but desperately wants to gain a foothold. Only Georgia stands between Russia and the two fighting forces (all three were part of the former Soviet Union), which border Iran. Earlier this week, Putin visited Iran and not only deepened ties between the countries but also received official support for his military actions in Ukraine.

When Gerami started the film with producer Henrick Vartanian and editor Chris Damadyan, it was long before Russia invaded Ukraine.

When the humanitarian crisis erupted there, people around the world were motivated to support the Ukrainian people and provide aid. By contrast, there has been little reaction or media coverage to the clash in Artsakh. Perhaps, Gerami suggested, Armenians “are not western enough.” 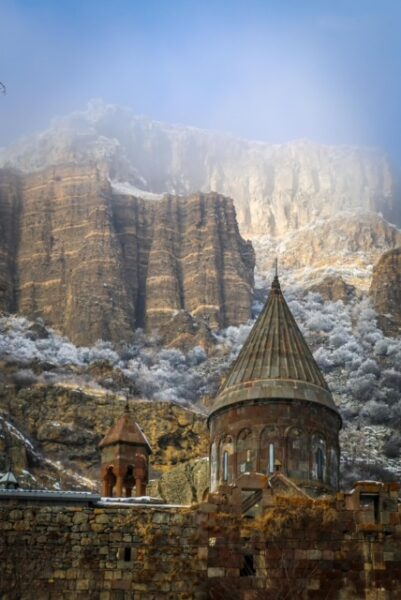 The Armenian monastery of Geghard dates from the 4th-13th centuries.

But there are certainly strong historical ties to Christianity among Armenians.

“Armenia was the first nation in the world to adopt Christianity as the official state religion, even before Rome was a Christian nation,” Gerami said. He pointed to centuries-old churches that are now at risk of being destroyed by Azerbaijan.

The monastery of Geghard, dating from the 4e until 13e centuries, and the upper Azat Valley contains a number of churches and tombs, most of them cut into the rock, illustrating medieval Armenian architecture.

In “Motherland,” we see familiar cast – including President Recep Tayyip Erdoğan of Turkey and Vladimir Putin of Russia – as well as a clearer view of their quest for control in Europe and the Middle East. That is why, says Gerami, the international reaction to Azerbaijan’s aggression against the Armenians in Artsakh interested both leaders.

Gerami initially used her media platform to draw attention to the fight against Artsakh with celebrity promo spots – those of Cher and Kim Kardashian are seen in the film. Through his radio show, he interviewed many members of Congress, which led to several appearances in the film, including Rep. Adam Schiff, Rep. Katie Porter, and Rep. Judy Chu, who also attended the premiere. in July.

“We got a lot of support,” Gerami said, “but the White House needs to do something.”

After seeing the film’s premiere, Mayor Ardy Kassakhian of Glendale approached Gerami to sponsor a screening for his community. About 40% of Glendale residents are Armenian, Gerami said.

The Glendale screening is scheduled for August 4 at the Laemmle Theater, a Q&A with Gerami and hosted by Mayor Kassakhian. Tickets are $25, with a portion of the proceeds going to the Defenders of the Fatherland Rehabilitation Center in Armenia, a facility for injured soldiers.

“That’s where you see a lot of them in one room,” said Gerami, who interviewed several soldiers for the film. “No arms, no legs, and they’re all [young]it’s really difficult.

That’s why he made the documentary, he said, “I did it for non-Armenians…to educate them about this major humanitarian disaster.

(Editor’s note: Vic Gerami is an occasional contributor to Goweho.com.)