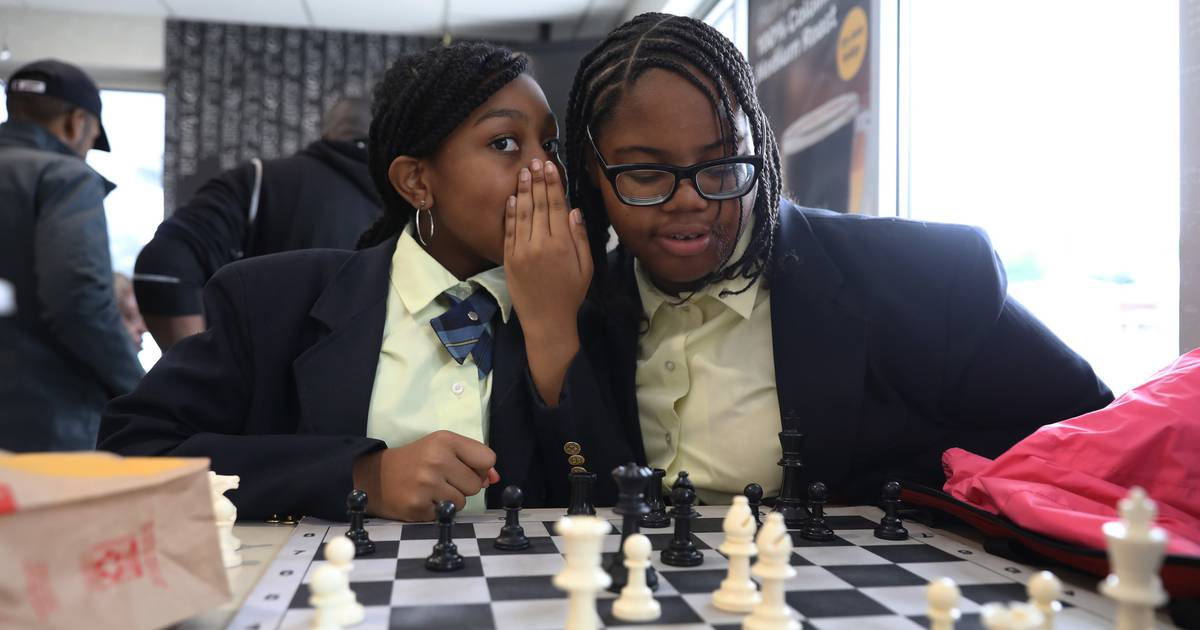 Shakira Luster fixes the chessboard, takes her pawn and moves it exactly two squares forward. The Queen’s Gambit, her signature opening. She taps on the clock and waits for her opponent to return.

Nothing shakes his concentration as the minutes tick by, not the voice calling out meal orders, not even the smell of fries. It’s a typical Saturday afternoon at McDonald’s at 95th and Halsted streets, where players from all walks of life have gathered for years to play games of rapid chess.

Every day, at least a handful of players can be found at a few tables in a back corner. It’s a family place, where the regulars know each other well but where the games are open to everyone. All it takes is one hit on the table to be placed in rotation for the next game.

Saturdays are different. Seasoned experts rated by the American Chess Federation compete against members of the chess team of St. Ethelreda Catholic School in the Auburn Gresham neighborhood. Most Saturdays the boards are not packed until after sunset.

On this particular Saturday, seventh-grader Shakira isn’t intimidated by her opponent, Robert “Cheese” Norfleet, a nationally ranked player with decades of experience on the board. She has been playing since she was 3 years old and is herself ranked: third in Illinois and 31st in the United States for her age group.

Players waiting for their turn – and a few of the curious who just picked up a cheeseburger – let out the occasional gasp as Shakira’s white pieces begin to outnumber Cheese’s black pieces. Both players move with increased urgency until her five minutes are up and the game is over.

She didn’t win, but the crowd eagerly compliments her strategies and offers suggestions.

The school team has been coming to McDonald’s for about a year, said Eric Luster, Shakira’s father and the team’s coach and founder.

The team has nearly 60 students, from kindergarten through eighth grade, who practice after school on Wednesdays and Fridays, and at McDonald’s on Saturdays. Many have earned their place at the tables of McDonald’s, where the old-timers don’t come easy with young challengers.

Some of the regulars said they had toned down their rude talk in front of the youngsters, but again on a recent Saturday several of them mockingly shouted for mops. “I’m going to need it to wipe up the blood after this game,” exclaimed a veteran player.

Luster said his kids were shy the first few times they came to McDonald’s, but now they strike with confidence regardless of the expertise of the players at the tables. In blitzkrieg, each player’s clock is set to five minutes, which means players have to quickly choose from a number of tactical strategies, Luster explained.

“There’s something about the challenge of playing an adult well and/or beating an adult,” he said. “Some kids love it.”

Luster’s mother introduced him to the game of chess when he was a young boy. Although he didn’t compete professionally until he was 40, he’s been “hooked ever since”.

“When I became an adult I discovered that there was a whole world of professional chess players outside of masters and grandmasters – you see them on TV – but there are chess tournaments games that people play all the time, the whole community does,” says Luster.

He founded the school team six years ago after reading studies that show chess can improve math skills. Similar analytical thinking is used to deduce how many apples are left or how to protect a king against an opponent’s rook, he said.

“With chess, you have to think carefully about your opponent’s move and you have to ask yourself, ‘If I make a move, what are the consequences of that move?’ and so on,” said Luster, who teaches math and science. “Math is like that when it comes to solving a problem…you have to break it down into steps.

The chess world is dominated by men, Luster said, but the best players on the St. Ethelreda team are girls. In June, Shakira, Trechelle Williams and Imani Hill finished first, second and third individually and first as a team in the All Girls Chess Tournament at Skinner North Elementary School. The team has many more wins and tournament titles, and Luster hopes to continue the upward trend.

Inside the refuge under the golden arches, older players have the opportunity to pass on the love of the game to a younger generation. For Thomas Murphy, a nationally ranked player, watching young players excel is a “gift”.

“What we have here is a nurturing environment that inspires them to be creative, whether it’s verbally, mentally,” Murphy said. “There’s enough spirit here to keep these kids motivated and safe. That’s a rarity on the South Side.

“If you follow the saying that it takes a village to raise a child, here we have a nice little village raising a group of children,” he added. “That’s what makes chess an enduring game, because we pass it on.”

After her match, Shakira grimly accepts the comments from the crowd and takes a seat on a stool next to her father and teammates.

She is the only one of Luster’s six children with a keen interest in chess, and he said he was delighted to have the opportunity to pass on the legacy, just as his mother and uncle did for him. him years ago.

Shakira has said she wants to be America’s first African-American female grandmaster, but even if she doesn’t make it that far, her dad said he’s happy with what the game has taught him about life .

“She’s a 13-year-old girl who wants to go to McDonald’s after school and play against old men,” he said. “If I can pass on the legacy of my daughter who made very good decisions because she learned chess, then I’m thrilled.”

Round robin chess tournaments are dead!