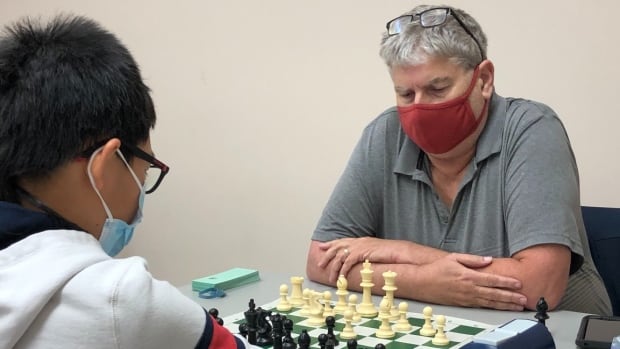 This is the year Lilith Metcalfe really got into chess.

“I was working and had a knee injury so suddenly I had excess time where I was just stuck on the couch or the bed,” she said. “And so I just started playing chess and picked it up and played like, I don’t know, thousands of games in the last six months or so.”

But none of these games have been played on a real chessboard. In fact, she had never played a serious game on a physical chess board until a few weeks ago, when the Charlottetown-UPEI Chess Club met for the first time in about a year and a half.

Like many other sports communities, the club has suspended all in-person meetings due to COVID-19.

But he didn’t completely stop and instead found new life online amid renewed interest in the old game of kings.

“I know a lot of chess sets are sold in stores from what I hear, so I think there has just been a general upsurge [in interest]”said Fred McKim, club secretary and president of Chess PEI.

At the start of the pandemic, McKim began organizing a “virtual chess club,” running events and tournaments through a chess website for people in the Maritimes.

“It has gradually increased so that we really have players from all over Canada playing,” he said.

The club had a lot of new players during the pandemic. But it’s only now that he has started meeting again that some of the newbies are starting to socialize with other members.

“Last week a few people played at my event online,” McKim said. “I was able to say ‘Hey, so and so, here is so and so. You’ve probably played 50 games in the last six months but, you know, you’ve never met.’”

Metcalfe is one of the new people. She started participating in the club’s online events around June.

It was about a year after the success of the Netflix miniseries The Queen’s Gambit brought chess into the mainstream.

“I think Queen’s Gambit was actually what sparked my interest, “she said.”Queen’s Gambit came out and started playing everyday. ”

The show tells the story of Beth Harmon, an orphaned chess prodigy who eventually becomes a world-class player.

McKim said Metcalfe wasn’t the only person who was inspired by the show to start acting.

“The Queen’s Gambit The Netflix series garnered a lot of interest last year and was one of the reasons online chess took off, ”he said.

“What we’re finding is that every tournament we do now, maybe a third of the players have never played in a real official over-the-board tournament before.”

“Then when you play over the board, you’re really in the moment, you know the person is there. There is much more. It could be stressful, for sure. “

But Metcalfe said those looking to play recreationally can find it very relaxing as well.

“It’s a great way to spend time, if that’s what you’re looking for. [It] encourage patience and poise, “she said.” You can’t go into a game of chess and get angry because you made a mistake. You just have to analyze the board without any emotion involved. ”

The Charlottetown Club is open to all Islanders. People of all ages participate in its events.

It meets every week and organizes tournaments every two months. McKim said online events will continue with his in-person meetings.

You can’t go into a game of chess and get angry because you made a mistake. You only have to analyze the painting without any emotion involved.—Lilith Metcalfe

An open tournament will be held in Charlottetown in December.

Metcalfe, who has never played in an over-the-board tournament before, said she was eager to enter a competition.

But she will have to get used to playing in person with other people.

“I can tell you for sure that I’ll be nervous when I do,” she said.