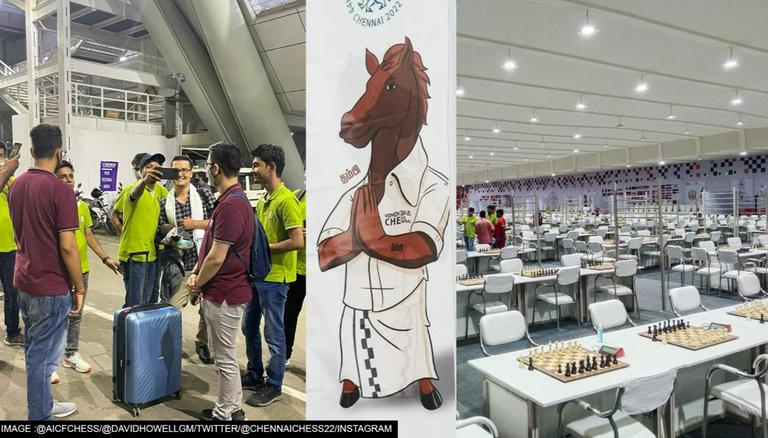 India is hosting the 44th edition of the Chess Olympiad, which will start on July 28 at the Four Points by Sheraton Mahabalipuram Resort and Convention Center in Mahabalipuram, near Chennai in Tamil Nadu. As the coveted tournament kicks off on Thursday, teams from different countries around the world have already reached Mahabalipuram for the Chess Olympiad 2022. Meanwhile, the city of Chennai has been heavily decked and decorated for the mega event , which left chess players amazed.

On Wednesday, chess promoter David Llada took to his official Twitter account and posted a tweet expressing his joy at having reached the site of the Chess Olympiad. In particular, he pointed out that India has become his new favorite country in the world, out of a total of 61 countries he has visited so far. He also mentioned that he had experienced incredible hospitality from his hosts since arriving in the country.

“Now India is officially my favorite country in the world – out of the 61 I have visited. I have to say I am privileged to have experienced incredible hospitality in most places I have visited. I went. But the people here, they open their hearts to you like nowhere else,” David Llada said.

Now India is officially my favorite country in the world – out of the 61 I have visited. 🇮🇳

I have to say I am privileged to have experienced incredible hospitality in most places I have been. But the people here, they open their hearts to you like nowhere else. 🙏

Meanwhile, David received a response from Indian Chess Federation (AICF) President Dr Sanjay Kapoor who said the tweet made his day. “David, your tweet has just made every #Indians day, especially the @AICFchess team and all the volunteers who are currently on duty to ensure that all players and visitors have a similar experience to yours. Welcome to the #ChessOlympiad in #India!” Kapoor said.

Spanish chess grandmaster Francisco Vallejo Pons also took to his Twitter account and praised the arrangements made in Chennai for the 44th Olympiad. He shared a photo of the Chess Olympiad hall and said, “This looks like the best Chess Olympiad hall ever! #ChessOlympiad2022.”

“We were so warmly welcomed by all Indians,” says Kevin Hogy

German Chess Sports Director Kevin Hogy also shared details about the hospitality he received after arriving in India. “Both @Schachbund teams for @FIDE_chess #ChessOlympiad arrived at the stunning Kaldan Samudhra Palace. We were so warmly welcomed by all Indians, hotel staff and @aicfchess. Thank you for an unforgettable day 1! We look forward to looking forward to the first round,” Hogy said.

British Grandmaster David Howell also expressed his thoughts on Twitter and said, “We were very well received in Chennai! #chess #olympiad2022″. At the same time, United States chess player Tatev Abrahamyan said, “I have arrived in Chennai! Looking forward to a great Olympiad for the United States team !#ChessOlympiad2022 #ChennaiChess2022”.