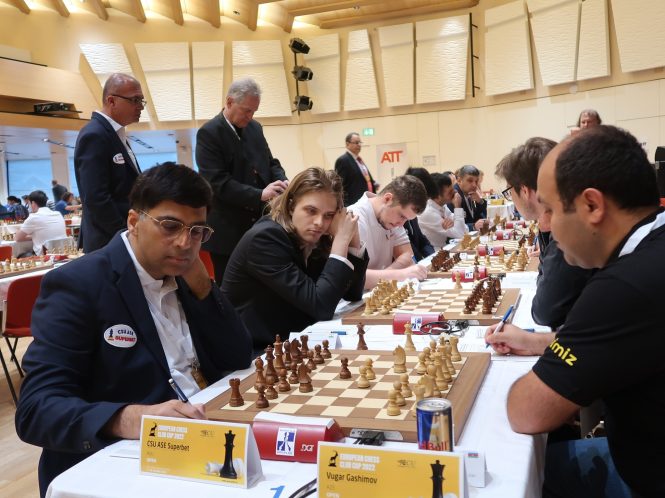 Three rounds have already been played at the 37th European Chess Club Cup and 26th European Women’s Club Cup in Mayrhofen, Austria, with six teams in the Open section and two teams in the Women’s section coming out on top with the perfect score of 6 match points. .

Without major upsets, most of the favorites scored in the third round of the Open tournament. Silla – Valencia Origin of Chess, Offerpill Chess Club, Schachclub Viernheim 1934e.V., Novy Bor Chess Club, CSU ASE Superbet and Tajfun SK Ljubljana took comfortable third-round victories to be co-leaders of the event.

After scoring 1.5 points in the first two rounds, Magnus Carlsen was rested yesterday and his Offerspill Chess Club secured a 4-2 win over Schachgesellschaft Riehen. Hansen Eric and Christiansen Johan-Sebastian won their games on the second and third boards, while the other games ended in draws.

The fourth round of the event starts at 14:00 CEST and brings some interesting encounters from the leaders. CSU ASE Superbet will face Schachclub Viernheim 1934e.V., Offerspill Chess Club will face Novy Bor Chess Club and Silla – Valencia Origin of Chess will face Tajfun – SK Ljubljana.

Meanwhile, third seeds ASVOe Pamhagen defeated number one seed Cercle d’Echecs de Monte-Carlo. With Danielian Elina and Osmak Yulia drawing against Muzychuk Anna and Cramling Pia, Ushenina Anna and Maltsevskaya Aleksandra were the heroes for the Austrian club as they beat Stefanova Antoaneta and Paehtz Elisabeth for the 3-1 win.

The fourth round of the women’s tournament will see a leaders clash with CSU ASE Superbet against ASVOe Pamhagen at the top.

Results, standings and pairings can be found here.

The live broadcast of the matches can be followed via chess24.com at the following link with commentary from GM Peter Svidler, GM Laurent Fressinet and IM Lawrence Trent.

Photos by: Fiona Steil – Antoni; The photo gallery is available on the facebook page of the tournament

Bengals’ Chidobe Awuzie has a serious game of chess — Andscape