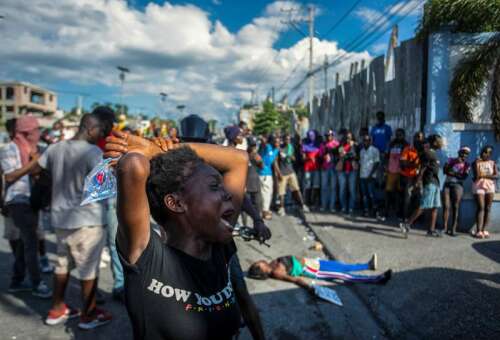 A woman cries near the body of another woman shot dead by police during a protest demanding the resignation of Prime Minister Ariel Henry in the Delmas neighborhood of Port-au-Prince, Haiti, Monday, Oct. 10.

The the plight of the country has become so severe that our fear now extends beyond the safety of the people to the survival of the state itself.

As things stand, armed gangsters have captured sections of the capital, Port-au-Prince, and the bloodshed continues. They also blocked the entrance to the Varreux oil terminal, preventing the distribution of millions of gallons of gasoline and kerosene at a time when rising prices have put food and fuel out of reach for many Haitians.

To add to the dilemma of the Haitian people, drinking water is scarce and the country is trying to cope with an upsurge in cholera. Unrest is growing as protesters took to the streets to demand the resignation of Prime Minister Ariel Henry.

On Monday, Haitian Foreign Minister Jean Victor Geneus told the United Nations Security Council that he had the “delicate mission” to bring before the council “the cry of distress of an entire suffering people, and to say loud and clear that Haitians don’t live – they survive”.

This call should be enough to sow consternation at what UN Secretary General Antonio Guterres has described as “an absolutely nightmarish situation”.

The Security Council, we are told, was divided on Monday on the dispatch of an international force to Haiti, and one can understand the reservations expressed by certain member countries. After all, some Haitians have in recent weeks resisted foreign intervention after the government signaled its need for assistance. In addition, memories of the 2010 cholera outbreak, blamed on UN peacekeepers and which claimed an estimated 10,000 lives, are still fresh in many people’s minds.

Mr. Guterres, in pleading for an “armed” intervention, explained that his proposal was an action “independent of the political dimensions of the problem which must be solved by the Haitians themselves”.

He is indeed right to say that the Haitian people must be the ones who decide their future. However, the current crisis in the country cannot be ignored by the international community.

Unfortunately, the problem we now see emerging is placing Haiti at the center of international politics.

On Monday, Mr. Geng Shuang, China’s deputy permanent representative to the UN, expressed his caution about supporting a new force for Haiti, asking whether such a force would receive the parties’ understanding, support and cooperation. in Haiti, or would face resistance, or even trigger a violent confrontation from the population at that time.

It was in response to a resolution by Linda Thomas-Greenfield, US Ambassador to the UN, which would authorize “a limited, carefully delineated, non-UN mission” led by “a partner country” experienced in assistance. to improve security and allow humanitarian aid to flow into Haiti.

However, China has expressed support for a second draft resolution to apply sanctions to gangs and their leaders.

This, however, was rejected by Russia, which said it would be “unacceptable” to support “external interference in political processes in Haiti” that would subsume Haiti’s interests “with the interests of reputable regional actors. world who see the American continent as their backyard”.

The sad reality is that while this game of political chess is being played, Haiti is on the brink.