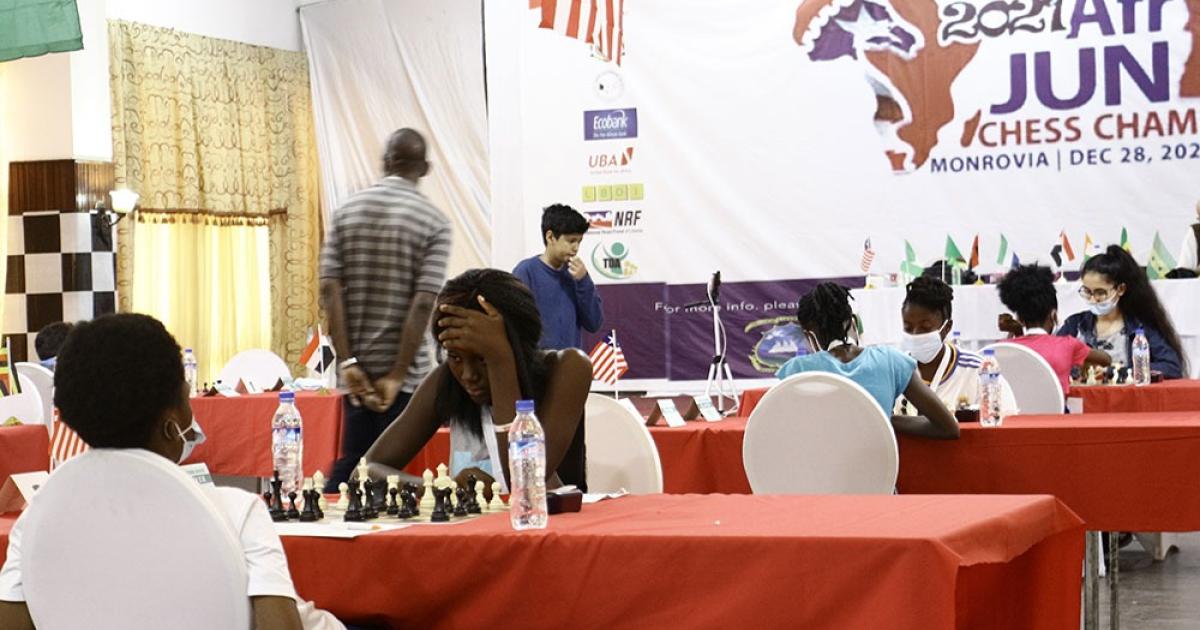 More than 20 junior chess players are currently battling at Monrovia City Hall for the coveted title of African Junior Chess Champion in the 2021 edition of this prestigious tournament hosted by the Liberian Chess Federation ( LCF) in collaboration with the African Chess Confederation. (ACC).

After five rounds before Saturday’s rest day, Woman International Master (WIM) Lina Nassr from Algeria scored a perfect 5/5 in the girls’ section to take the lead in the standings, followed by her sister, WCM Manel Nassr, while Algerian FIDE Master (FM) Lamine Brahami led the open section only on the tie-break, having scored 4 out of a possible 5 points.

With an Elo rating of 2212, FM Brahami is the strongest player at the African Junior Chess Championships 2021. However, he lost to 14-year-old Mauritanian prodigy Mohamed Abderrahim Taleb Mohamed in the third round on Thursday. . Taleb’s third round victory over FM Brahami shocked spectators at Monrovia City Hall and online as Algerian FM had played the first two rounds almost perfectly and the scoring difference between the two is huge.

Going into Round 5, Taleb Mohamed was the clear favorite to win the Open Section, as he followed up his dramatic Round 3 win with a win over 10-year-old Egyptian rising star David George Samir. But West Africa struck in round 5. Nigeria’s Eyetonghan Denyefa Callistus beat the high-flying Mauritanian with the blacks in round 5 to open the tournament in the open.

With four rounds to go, the Girls’ Section will certainly be won by one of the Nassr sisters from Algeria, but the Open Section is still hotly contested. Liberia’s junior players scored a best 2.5/5 before the New Year’s Day rest day. Morlue Kerkula, David Leroy Debblay, Jacobs Mitchell and Wallace Williams all have a performance of 50% (2.5 points) before Round 6.

Until Sunday evening, Round 6 was still being played.

The African Junior Chess Championship is an annual chess tournament open to African players under the age of 20. The tournament was first held in 1980, and since its second edition in 1989, has been held every year except for 2010 and 2020.

In accordance with the regulations of the world governing body of chess (FIDE), the African Junior Individual Chess Championships are open to all players of the federations of the African continent.

Besides cash prizes and medals, the winners of the open and women’s championships earn the right to participate in the next World Junior Chess Championships. In the Open Championship, the top three players earn trophy and medal titles, while the top player additionally earns a standard towards the Grandmaster title. In the women’s championship, the top player after tiebreakers wins the title of Woman International Master, while the first-placed player additionally earns a norm towards the title of Woman Grandmaster.

A Polish player falls from his chair after losing a game of chess. Internet keeps laughing