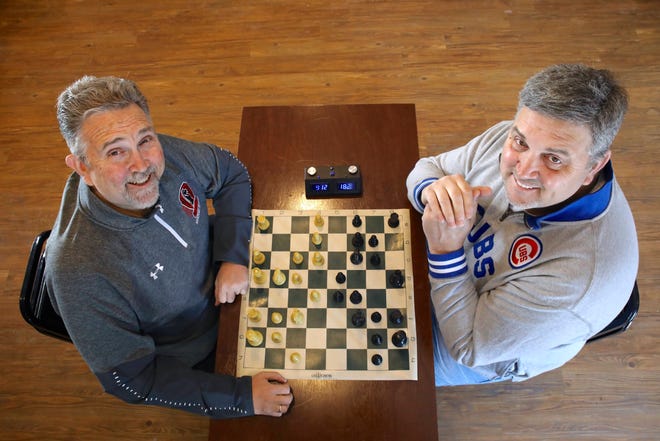 ROCKFORD – Joe Guth grew up learning chess at the Ken-Rock Community Center before stepping away from the game in the late 1970s.

Then the movie “Searching for Bobby Fischer” came out in 1993 and it rekindled his love for the game.

Last October, Netflix released “The Queen’s Gambit” miniseries, based on a fictional book about an orphaned chess prodigy who rises to the top of the chess world by battling drug and alcohol addiction.

The miniseries, along with the fact that people got stuck inside, fueled another chess boom. Chess.com, a social networking and chess server website, began adding 1 million new members every month after pandemic shutdowns began last March. According to a Bloomberg article in December, chess.com added 2.8 million new members in November alone after the miniseries dropped.

Guth and his brother, John, who now runs the Ken-Rock Community Center, relaunched the Ken-Rock Chess Club in March, hoping to capitalize on the growing interest in chess to train a new generation of players.

Joseph Guth coached the Auburn Chess Club in recent seasons. Several of his players graduated after last year and with most students attending remotely, he was unable to recruit new players to continue.

“People can play online as much as they want, but it’s more fun to play sitting in front of someone,” said Joe, an engineer who has worked for Collins Aerospace, and its various incarnations, since. 1997. “Our goal is to get kids playing here so we have a steady stream of players when they enter high school.

John Guth, manager of Ken-Rock, said the club was for everyone.

“We want adults as well as children,” John said. “Children come and go; it is the adults who will wear it from year to year.

In 2020, Ken-Rock moved from its longtime 11th Street location to a former church at 625 Adams St.

Past coverage:Struggling Ken-Rock looks to the community to recoup his losses

The goal of both is to work with other organizations such as the Rockford Chess Club to once again establish Rockford as a regional chess center. Ken-Rock hosted events such as the Northern Illinois Junior Open and in the 1970s the area produced a national champion when Donald Reents won the 1975 US Junior Open Chess Tournament.

The Guths would like to be part of a city chess championship again. Ken-Rock plans to hold his first tournament this fall, the Paul Deleeuw Memorial Chess Tournament, to honor a Rockford player who was with the original club. Deleeuw reached a rating of 1,755, which is an above average tournament player, before he died in 1992.

The weekly Ken-Rock Chess Club will meet for the first time from 6-8:30 p.m. on March 3. The Guths will run a four-week course for people aged 7-79 who are new to chess, as well as match existing players. There is no cost to attend. The community center will accept donations.

Alex Gary is a freelance correspondent.