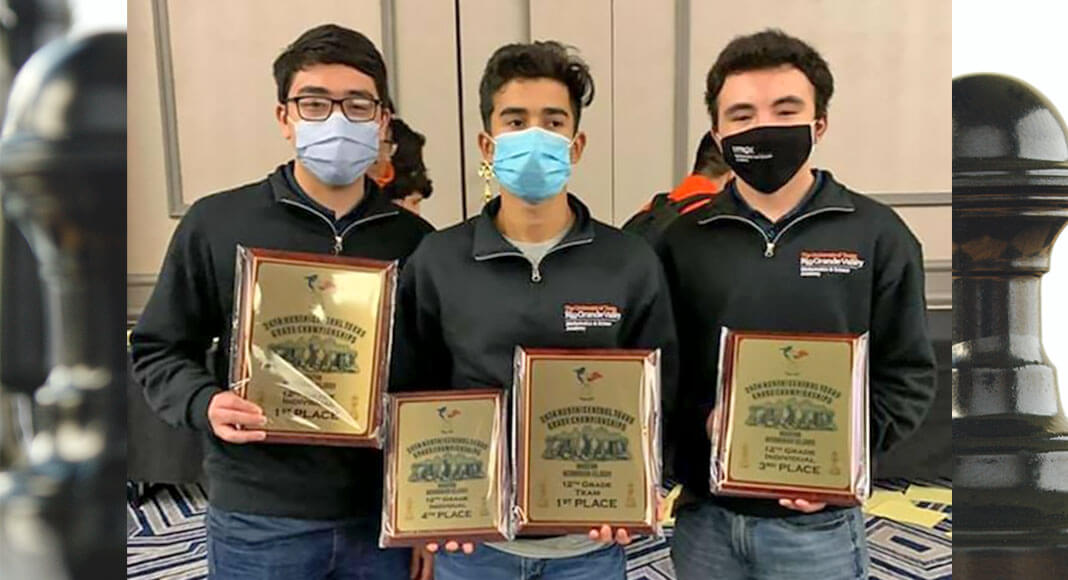 By Amanda A. Taylor

The UTRGV MSA was represented by Carlos De Leon, Adolfo Balderas and William McNutt, at the competition held on October 30 and 31 in Houston.

The team is coached by UTRGV chess coach and grandmaster Bartek Macieja, who oversees the multiple UTRGV chess teams that have successfully competed in tournaments throughout the state, as well as at national and international levels.

The team is now heading to the K-12 National Chess Championships in Orlando, Fla. In December.

The MSA chess program is relatively new to the UTRGV, starting with the tournaments in the 2019/2020 academic year.

MSA Director Dr Wilma Smetter said she was grateful to Macieja for her dedication and time spent with this new chess team over the past few years.

“Our UTRGV MSA chess team is just another phenomenal part of our award-winning program,” she said.

Macieja said chess allows students to travel and experience new places, such as the next tournament in Orlando.

“We hope the chess program will help them be successful in life,” he said. “They will learn new skills and their chess successes are often rated by top universities in the country.”

McNutt, an MSA senior in Brownsville, won the individual championship, scoring five of six possible points, and is now the state champion in the competition.

“In chess there are a lot of obstacles on and off the board,” he said. “But what worries me the most before going into a game is making a mistake that changes the outcome of the game.”

Prior to the tournament, McNutt was ranked No.4, meaning there were three other students who ranked a bit higher and could easily beat him. In the second round, McNutt lost to the tournament’s highest-rated player, which took him down a few spots.

Instead of accepting defeat, McNutt swept away and won the remaining matches, knocking out his competition and winning the championship.

“Prior to this year, my last tournament was in November 2019. This year I’m happy to be able to compete in chess over the board again,” said McNutt. “Our chess coach, Grandmaster Bartek Macieja, worked with us once a week to hone our skills.”

“The main opponent played the last round against our student, Carlos De Leon,” said Macieja. “By winning, not only did Carlos move up to fourth, but he also paved the way for William to win the competition.

“William didn’t waste the opportunity,” Macieja said. “He won his fifth game in six rounds – and became the state champion.”

De Leon, also a senior at MSA in Brownsville, said winning isn’t always about beating others, but often about overcoming your own obstacles.

“For me, the success in this tournament was not in my placement, but in being able to believe in myself,” he said. “I had a tough start to the tournament and it was extremely frustrating, but it reminded me of how far I’ve come and I was able to finish strong.”

His teammate Balderas, who was third and tied for second, said he was delighted to be able to attend a tournament in person, although the pandemic still makes him a little nervous.

“I think mountains are made to be climbed and the only way to get to the top is with hard work,” said Balderas, also a senior at UTRGV MSA in Brownsville. “This tournament was something I had to train for on a daily basis. Win or lose, I learn something from every game I play, which allows me to grow and climb more mountains.

McNutt, De Leon and Balderas will all compete in the Kindergarten to Grade 12 National Chess Championships December 3-5 in Orlando.

De Leon said he was a little nervous about going to the United States and wanted to do his best.

“The expectations are high,” he said. “However, this recent tournament reminded me of my capabilities and reinforced my mindset that I will represent my team well.”

As part of the program, Macieja said, students were also required to complete a three-hour chess math course, which uses chess as an educational tool.

“At UTRGV MSA, we want to turn potential into success, and we couldn’t be more proud of William, Adolfo and Carlos,” she said. “They represent the best of our Academy of Mathematics and Sciences UTRGV. Everyone has a fantastic work ethic when it comes to academics and chess preparation.

Desperate migrants as pawns in a treacherous game of chess