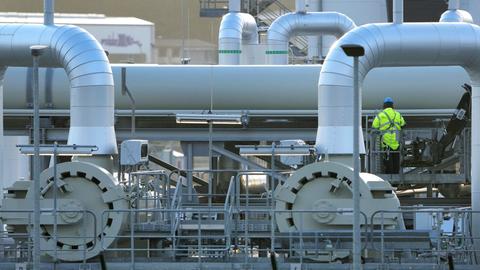 Germany’s decision to suspend the new pipeline was intended to send a message to Russia to prevent it from “weaponizing” the gas.

German Chancellor Olaf Scholz announced on Tuesday that Germany would suspend the certification process for the Nord Stream 2 gas pipeline following Russian President Vladimir Putin’s decision to recognize the two Russian-backed breakaway regions of Donetsk and Luhansk as states. independent. It was shortly followed by the decision to send Russian troops to the two regions on “peacekeeping missions”, marking a decisive escalation in the conflict between the West and Russia over Ukraine.

Shutting down the undersea pipeline being built to deliver Russian gas to Europe directly via Germany’s Baltic coast is likely to be one of the biggest sanctions that Europe, the US and the UK are expected to impose on Russia after Putin’s hour-long televised address Monday night.

Several observers had warned that there was a risk that the gas pipeline, which is completed but not yet operational, will become a major lever for Russia in Europe. The continent already depends on Russia for more than 40% of its gas supply.

The 1,230 kilometer pipeline worth $11 billion had been filled with gas and was awaiting the final green light from Germany and the European Commission. Its majority shareholder is a subsidiary of the Russian gas company Gazprom, which contributes significantly to the coffers of the Russian state.

Ukraine feared the German pipeline would put the country in a vulnerable position by allowing Russian gas to bypass it by doubling the capacity of the existing Nord Stream I. Currently, Ukraine and Poland collect gas transit fees on deliveries to Europe.

“It was somewhat unexpected that Germany was the first [to impose] quite severe sanctions,” Peter Zalmayev, executive director of the Eurasian Democracy Initiative (EDI), told TRT World. “The Germans had been considered a weak link in the Western will to respond to Vladimir Putin. Until now, Scholz had been reluctant to even mention Nord Stream 2 by name,” he adds.

Scholz said the move was intended to send “a clear signal to Moscow that such actions will not go without consequences.”

The Ukrainians had called for tougher sanctions against Russia to deter an invasion. Since Putin’s decision, the EU and US have unveiled new sanctions targeting Russian oligarchs and financial institutions.

German Chancellor Olaf Scholz has issued an order to halt the certification process for the Nord Stream 2 gas pipeline. Good. Welcome to the brave new world where Europeans will very soon be paying €2,000 for 1,000 cubic meters of natural gas!

Gas as a weapon

In July last year, a joint statement by the United States and Germany pledged a coordinated response to any “Russian effort to weaponize energy”.

Analysts have argued that the pipeline gives the impression that the EU is divided, with its members pursuing their own narrow interests, while simultaneously creating friction within the transatlantic alliance.

“Nord Stream 2 must be assessed in light of the security of energy supply across the European Union,” European Commission President Ursula Von Der Leyen said after the EU unveiled its sanctions on Tuesday. .

“This crisis shows us that we are still too dependent on Russian gas.”

Oil and gas prices have risen amid the escalating crisis in Ukraine.

“Welcome to the brave new world where Europeans will very soon be paying €2,000 for 1,000 cubic meters of natural gas!” Medvedev said in a Tweeter.

A spike in gas prices due to shortages this winter has forced consumers and governments across Europe to pay higher energy bills. Many analysts saw the crisis as “manufactured” by Russia, which fulfilled long-term contracts with European customers but failed to fill its underground storage on the continent.

While the continent relies on Russian gas for its energy transition, the reverse is also true and Russia relies on Europe as a key market.

Glasgow Chess Makers: Our Next Move is Edinburgh and Beyond