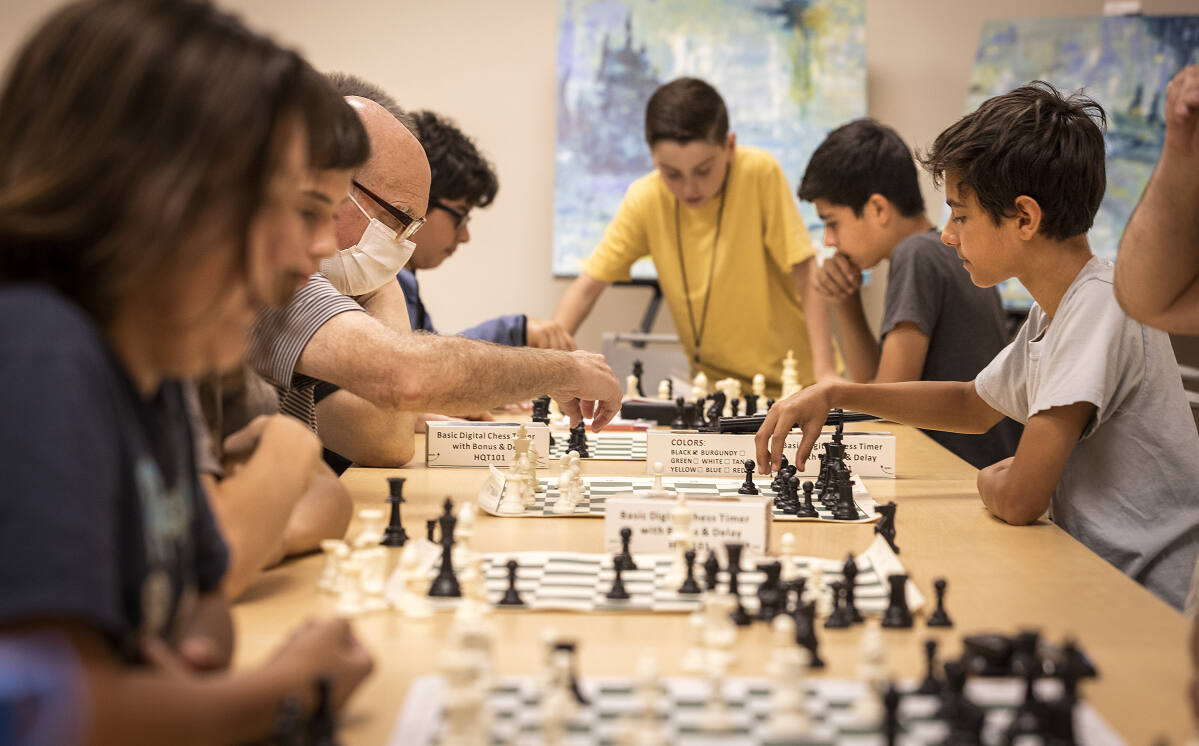 Jordan had built what he considered a solid position, only to see Doel-Agarwal tear him down and put him on the defensive.

“You can go here, here or here,” said 14-year-old Doel-Agarwal, pointing to spaces on the Jordanian side of the board. “So I’m forcing you to the back line.”

Jordan kept his eyes on the board in front of him.

But also, Jordan will admit it later, fine.

Back and forth, learning, strategy development – ​​it’s all part of the master plan behind the Intergenerational Chess Club, a student-led group launched in April with a few chess boards and a lot of enthusiasm.

They meet at 3:30 p.m. on Thursdays at the Sevastopol Regional Library.

“I imagined it as a club, but I didn’t know how it would turn out,” said 13-year-old Dagan Prusky, one of the middle school students behind the club’s creation. “I thought it would be so you had someone to play with.”

While Prusky and a few friends from Willowside Middle School perform steadily, the cross-generational play is slowly building.

Jordan, a retired Sonoma State University business professor, said he was studying chess strategy at a coffee shop months ago when someone approached him and asked if he knew anything about the fledgling library group.

He didn’t, but he would soon.

A self-proclaimed chess enthusiast, Jordan was already the advisor to the chess club at Analy High School, where his twin sons are in second grade.

He showed up at the library to find Prusky and his buddies playing.

Jordan was a fan immediately.

He loves the game and he loves teaching it. Or at least play it with other enthusiasts.

“A lot of studies show that children learn to solve problems, they learn to concentrate, they learn to plan future things, to understand reading,” he said. “I think there are a lot of benefits.”

So, to strengthen the group, Jordan purchased and donated a number of control panels and clocks to the club.

Attendance has increased and these signs and clocks are now in regular use.

Prusky for his part loves to play and improve.

“It’s such a balanced game,” he said. “It’s so different from other games. It’s 100% strategy. I really loved that. You hijack the power of the coins and try to use strategy.

And the intergenerational piece is an added bonus, players said.

Santiago Melendez, another eighth grader from Willowside and arguably one of the strongest players in the mix, said it was fun to challenge the adults and win.

On a recent Thursday, there were about 15 chess players sitting at different boards. More kids than adults, but a pretty good mix.

Dixon Wragg, who belongs to the adult set, said he came forward at Jordan’s request hoping to do some strategic mentoring with younger players.

It doesn’t always happen that way, he said with a smile.

“The idea was maybe there would be a bit of mentorship between the older and the younger ones, but some of these young people can guide me,” he said.

Thus, he changed the idea of ​​what he models for young players.

Prusky, who loves the game and trains regularly on the computer, said the longtime Willowside Chess Club and new club gatherings at the library give him not only a chance to play, but also to be a student of the game.

And Jordan has been a great resource for that.

“Last week he taught me ‘the Queen’s Gambit,'” he said. “It’s basically an opening that uses the queen pawn and the next pawn, you push both so you can develop the knights.”

Jordan loves the game. And the more people he sees playing, the better.

His vision of learning how to be a better chess player sounds a lot like a decent outlook on life.

“If you want to improve, it’s not just about moving pieces randomly. Just because you can move a piece doesn’t mean you have to move a piece,” he said. “If you want to become a better player, you can’t constantly make weak moves that don’t further your cause.”

You can reach staff columnist Kerry Benefield at 707-526-8671 or [email protected] On Twitter @benefield.