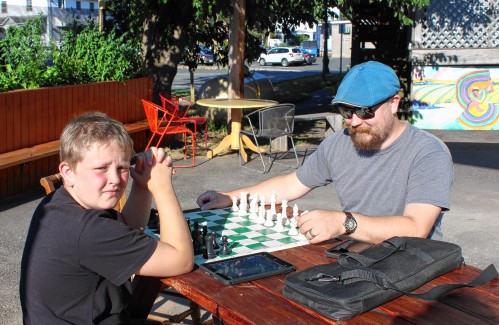 Norcross and his son, Jessie, two of the competitors, were in Shelburne Falls for a vacation and discovered the tournament on Facebook. Norcross said he reviewed chess theory the day before the tournament and was excited to participate.

“It’s a nice introduction to chess tournaments without having to travel to Boston,” Norcross said.

Seaver created the tournament as part of a larger project to form a Shelburne Chess Club. He started by donating tables to the owners of Bridge Street Bazaar. Seaver had them built by a local carpenter and painted chessboards on top of the tables himself.

“There are a lot of great little public spaces that could be turned into micro-parks,” he said. Although he only has tables in Shelburne Falls, he hopes to set up more in Greenfield, Northampton and beyond.

Chess is growing in popularity right now, thanks in part to the Netflix show “The Queen’s Gambit,” according to Seaver. With this growing popularity, Full Moon Chess Tournaments will continue and weekly matches at the Shelburne Falls site are expected to begin soon.

More information on events and classes can be found on the Shelburne Chess Club website, shelburnechess.com.