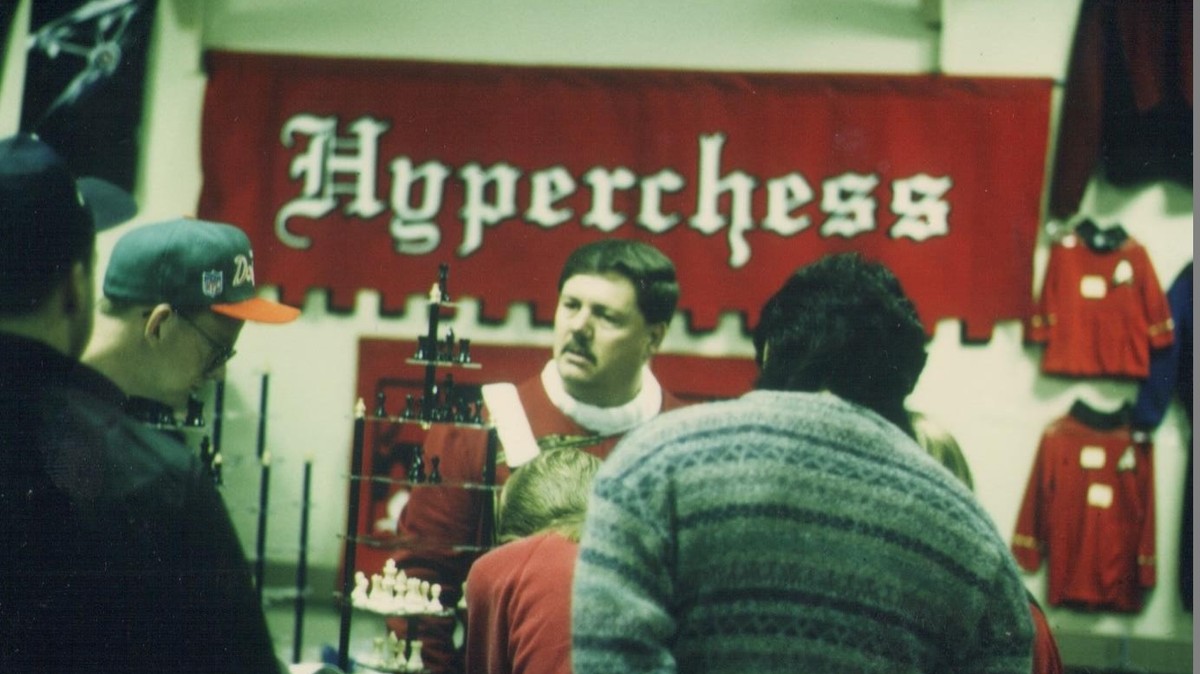 The story of “Hyperchess”, a 3D chess game inspired by Star Trek

In 1993, Max Chappell, an obscure board game designer from San Diego, California, loaded up his Plymouth Voyager van with a bunch of funky-looking chess sets and headed north. A Star Trek convention was being held at the Westin Bonaventure in downtown Los Angeles, and Chappell sniffed out an opportunity to sell his singular creation, a 3D chess set called Hyperchess.

Hyperchess is the story of two obsessions: one with chess and the other with Star Trek. If one of these obsessions is more vital than the other, it would be Star Trek. To your average chess player, Hyperchess was just a weird chess game. But for a subset of Trekkies in the mid-90s, Hyperchess was a strange chess game that resembled the iconic chessboard of Star Trek: The Original Series.

“Star Trek fans loved it,” Chappell, 69, told me over the phone. “They thought my game was the original board that was on TV. But it wasn’t. It was actually a playable game.

Much like the famous Star Trek prop, Chappell’s chessboards were impenetrable. Watching one is enough to make your head spin. While ordinary chessboards lay flat on a surface, Chappell’s chessboards are nearly three feet tall, with laser-cut surfaces of staggered asymmetrical shapes in a helical pattern around lamp stems. It looks like one of those multi-level cat condos, only with chess pieces perched on the platforms instead of sleeping felines.

Despite the strange appearance, Hyperchess is basically a game of chess with a Ferengi-sized ride. Chappell, who has spent his life contemplating the construction of the game, designed the rules to stay true to its sources. As with vanilla chess, Hyperchess is a war of wits between two players who are both trying to trap the opposing king.

“The unique feature is the rearrangement of the original 64 squares,” wrote Chappell in Hyperchessthe instruction manual. This revamped structure allowed pieces to travel in all directions and, most importantly, up and down. They could move in three dimensions.

The quest to free chess from the flatness of the checkerboard is nothing new. Played on eight standard sized chessboards stacked like a two-tier sandwich, Raumschach (German for “chess space”) is considered the classic version of 3D chess, developed in 1907 by occult scientist and Rosicrucian mystic Ferdinand Maack. With over 260 concept tweaks listed on The Chess Variant Pages Website, 3D chess clones abound. The only problem is that many of these games have never been good.

“Most 3D chess games don’t attempt to be true to the source material, and some of them are pretty superficial and worthless,” said Dave Matson, author of Explore the realm of three-dimensional chess, told me in an e-mail. “The inventors wanted their games to have some resemblance to chess, but the vast majority of them didn’t give it much thought.”

Chappell was enlightened to the woes of 3D chess at an early age. As a child, he showed great aptitude in chess, able to beat students many years ahead of him. But by the age of 13, he had grown tired of the standard rules. After classes at Samuel Gompers Junior High School in El Cajon, Calif., he and his board game buddies began experimenting with a modified version of Raumschach which used three chessboards. (The origins of this game are unclear, but it was first documented in the 1968 edition of Variations of chess: ancient, regional and modern by John Gollon, and later marketed as space chess by a company called Chessex.)

The boys placed the boards on the table side by side, imagining that they were suspended in the air, one above the other. But no one ever seemed to win. The king could always escape. There were too many squares.

Squares consumed Chappell. Determined to come up with a 3D version of chess that was actually playable, he would sit in his bedroom at his parents’ house with a drawing board in his lap, dreaming up three-dimensional geometric shapes. He tried three boards but with fewer squares. He tried a 4 x 4 x 4 cube. He experimented with pyramids. But no matter the combination, they all played like crap.

“I was trying to make a sort of cube. But when I saw the chessboard on Star Trek, my thinking completely changed,” Chappell said.

Star Trek’s 3D chess board was an unbalanced and complicated chess tower that could sometimes be seen sitting on tables and counters in the USS Enterprise. The set first appeared in the original series pilot episode “Where No Man Has Gone Before,” with Spock poised to put Kirk in checkmate, and he survived to become a hallowed relic. from Star Trek.

The first time Chappell laid eyes on the prop in the late 60s, he was transfixed by it. Suddenly, it occurred to him that a 3D chess set didn’t need to be symmetrical. In fact, the symmetry may have been a drawback. By moving the boards out of alignment, the game could retain more of its natural cadence in vertical space.

Soon after, he set out to incorporate this unfamiliar concept into his designs. Unfortunately, Star Trek offered little other guidance. The show’s chess sets were built to look fashionably futuristic, with little logic behind the ornate setup.

“The show offered some very loose ideas on how to play, but clearly not enough to define real gameplay. to exist at more than one level? Could you come down directly? fellow 3D chess designer Andrew Bartmess said via email. In the 1970s, Bartmess wrote a rulebook called Tri-D Chess, designed to be played on a homemade replica of the Star Trek chessboard. Its rules featured “attack boards”, or small chess lifts that could lift playing pieces to other levels of the board, as seen on the show.

Chappell hoped his version would maintain the integrity of chess, but coming up with a design was trickier than you might think. He spent about two decades developing the specifications for his invention. He was 22 when he rigged the first Hyperchess plywood and aluminum prototype in his father’s garage, and 45 when he sold the first unit made. In the years that followed, he worked extensively on the game, redesigning the layout countless times, filing various patents, and unsuccessfully trying to remove the bubbles from the Formica laminate, which he planned to use to cover the panels. transparent.

After 23 years of readjustments, Hyperchess was finally ready to be unveiled to the world. In 1993, on the first morning of the Star Trek convention at the Los Angeles Westin Bonaventure, Chappell set up a small booth with a folding table, scarlet banners, and two mutant chessboards. As he paced his cramped booth, waiting for the show to begin, his hands were sweaty. The vendor area would soon be teeming with fans dressed in brightly colored Starfleet uniforms.

“When some people see the board, they’re like, ‘Wow, cool, let’s try this!'” said Nick Russell, who currently develops a VR version of Hyperchess, by telephone. “But a little more often the reaction is, ‘I have no idea how I would play that.'”

It turned out that the Trekkies were like, “Wow, cool!” variety. Over the three-day weekend, Chappell sold nearly $10,000 worth of Hyperchess sets. Then he returned to his garage to build more. Over the next five years, he would travel the West Coast, carrying large boxes of chess pieces to nearly every Star Trek convention within driving distance. Initially, sales were strong. Not even the 1994 release of Star Trek Three-Dimensional Chess Set from Franklin – the officially licensed version of Star Trek chess, borrowed from Bartmess Tri-D Chess rules — demand mitigated.

“The Franklin Mint sets were very expensive and very shabby,” Chappell said. “Really, Three-dimensional chess was not a playable game, even if a guy [Bartmess] wrote rules for it. My intention was to make it a playable game.

But the audience for a well-played, unlicensed Star Trek chess knockoff proved limited. He continued to transport the boards to sci-fi conventions, but fewer people were interested. The price has gone from $300 to $200. It didn’t really help. All around him he saw an influx of unknown alien species like Wookiees and Narns as Star Trek conventions broadened their appeal to include younger, hipper fandoms.

Eventually he quit going to conventions altogether and opened an online store, selling several boards a year until his GoDaddy domain expired a few years ago. In total, he has sold around 450 boards and has enough remaining stock to build around 30 more. Despite the low numbers, he did not give up.

Recently, supporters of Donald Trump claimed that the president plays chess in 3D, which means his strategy is so advanced that his political opponents don’t even understand the complexity of the terrain they are playing on. Ben Garrison, who describes himself like “drawing politically incorrect cartoons that the mainstream media won’t air,” Trump even imagined as play a game that looks a lot like Hyperchess against Mexican President Enrique Peña Nieto. With so many pro-Trump pundits proclaiming that the president is playing 3D chess with his politics, weird chess variants have something of a while. Chappell’s eccentric dream of taking chess where no one has gone before has never been more justified.