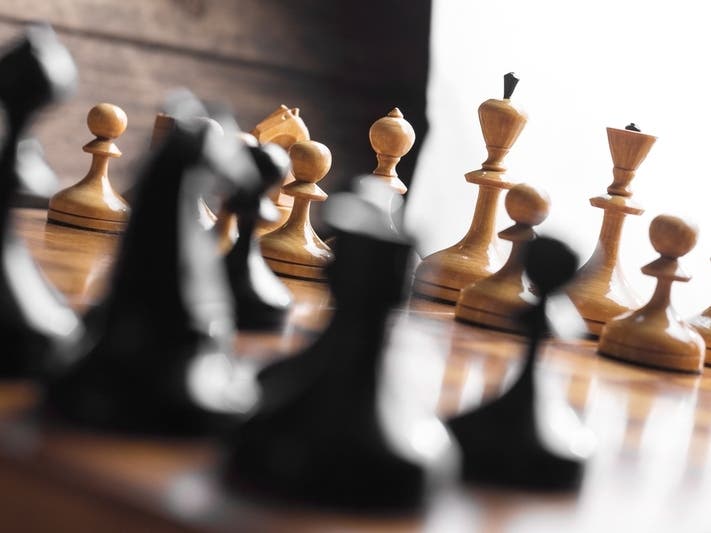 As local female chess players explain, you don’t need streaks of fiery red hair like the show’s central character to stand out. These players have tenacity, stamina, and problem-solving skills that make them difficult to defeat.

Patch interviewed female chess players from Mequon, Brookfield, and New Berlin to discuss the show as well as their experiences as chess players.

Maddie Weber, 16, from Mequon, has been playing professional tournaments since she was 10 years old. Weber learned to play chess from her mother and was encouraged to go to a chess club.

She walked into the club meeting room and found only guys. The members of the club said they would put Weber with someone and, in the end, he was the best player in the club.

“I beat the guy. It was an interesting moment that I’ll never forget,” Weber told Patch.

Maddie Weber from Mequon plays chess during a match. (Photo courtesy of the Weber family.)

She told Patch that most chess players are male and that she thinks the game will never be equal between the genders. The advantage for her is to see more players joining the game.

As the battle of the sexes continues, mentalities have changed. Weber said there was the idea that playing against a girl meant an easy win for the guys. After players like Weber have moved their pieces strategically for checkmate, it’s clear the game isn’t easy for anyone.

What she likes about chess is that every game is different and you will never have two identical games.

Maddie heard about the Netflix show but didn’t watch it. She doesn’t know if it’s because of her gender, but she was asked why she played in the section above her. In the series, the main character faces some gender bias from others.

“The chess community is much more loving than the show shows,” Weber said.

She used to play in many tournaments and also went to cafes and played against older men.

“It was about playing chess and not gender or age. I think it’s just wonderful how people can come together like that,” Weber said.

Weber is currently a chess coach and said what players need most is support. In her experience, she had two types of coaches: one who was very judgmental and the other who gave her confidence. To be a good coach, you need to have a balance of the two, according to Weber. As a coach, she enjoys seeing her students improve and watching them play. Two of his chess students ended up winning tournaments.

“You have to have a coach who makes the game fun,” she said.

Gauri Menon, 14, has been playing chess for nine years. The Brookfield Central High School student learned chess from his father. She still remembers her first game and how her father warned her about a chess move.

“I lost in four shots, and it was because of the shot my dad told me about. I heard it but didn’t apply it,” Menon said.

“I have to be creative and imaginative to get out of tough problems or win a game,” she said.

Learning how to lose a match is also important. Menon said if she lost a key game in a big tournament, it would weigh on her for a day.

“After that I try to pick myself up. I review the game and see the mistakes I made and how I could have done better,” she said.

The main character of “The Queen’s Gambit” struggles with stressors that distract her from her game on the show. Menon said it could happen to players in real life. She said there are times when a big test comes around the same time as a chess tournament.

Menon said she learned that it all depends on the state of mind.

“You can’t go into a tournament thinking about the big test on Monday. The main thing I have to focus on is chess,” she said.

The only thing may be chess, she said. While Menon is playing, she can only think about the next move and not move on to next week.

“It’s not perfect. I’m still learning how to do that,” Menon said.

Menon told Patch that the number of tournaments she’s played in has made her a better player. His rating is 1960, which is considered good.

Menon admits she hasn’t watched ‘The Queen’s Gambit’ but hopes viewers can appreciate the players’ determination to go far in the world of chess.

“Wearing them out with his patience”

Bella Kurth, 13, from New Berlin has been playing chess for four years. She watched a movie at a Milwaukee film festival about a young girl learning to play chess and was intrigued. Kurth joined a local club and said there were about 10 other girls out of 60 players.

When she started playing, she went to a tournament in Nashville, Tennessee. Bella said she holds the world record for the biggest tournament, with 5,000 players. It was a good experience for her, Kurth said.

The Eisenhower Middle School student said the key to success was having patience.

“You need time to reflect and strategize,” she said.

His mother, Theresa, said that although there are chess clubs, it’s a different environment to play in a tournament. There is a large group of children who are emotionally invested in the game.

“It’s not uncommon to hear groups of people crying because of their age,” Theresa told Patch.

Theresa said some games can be quite long and intense – and if a player doesn’t see a checkmate coming, the impact can be devastating.

Both mother and daughter agreed that if someone spent an hour on a game and it ended in defeat, that person might feel emotionally drained.

At 13, the game helped Kurth learn to have patience.

“She’s really good at wearing down her opponents with her patience. I’ve seen her do it,” Theresa said.

Kurth is somewhat reserved, but her mother is happy to pay her respects. It was the last day of a tournament and all the signs were gone. Everyone was waiting for the results of their match.

“She went 15 minutes with a second on her clock in a tournament and kept moving until she beat the kid,” Theresa said.

The proud mum said she broke down in tears watching Bella and described her chess moves as “dazzling”.

Theresa said anyone serious about chess will have a chess coach. Kurth had a chess coach who moved away but kept in touch. The coach praised Kurth for becoming a more confident and stronger player.

What Theresa admires about chess is that someone can be any age, any gender, any background, and “you can always defend yourself against a man of 80 or a massive high school kid. It’s unbelievable,” she said. .

Both ladies watched “The Queen’s Gambit” and felt the camaraderie between “Beth Harmon” and her friends was well reflected.

“Men were skeptical of Harmon at first until they saw what she could do. Bella went through that too,” she said.

Kurth had boys on her team who didn’t take her seriously at first. Her mum said it wasn’t until she was last in a game and they “saw her pull a rabbit out of a hat to win”. After the victory, the other members of the team had respect for her.

“I wonder if ‘The Queen’s Gambit’ will make chess cooler,” said Theresa. “It’s not really considered cool, but there’s a huge subculture.”

At what age do chess players peak?